It’s a Jolly Holiday with Amelia 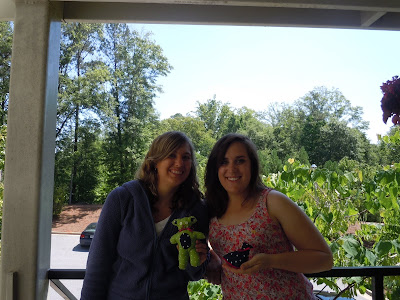 **This post got deleted for some terrible internet reason, so I reposted it***


When I was a freshman, I met this girl named Amelia at the dining hall through some mutual friends and then sort of never saw her again.  Until this year (hereafter referred to as “the year of Amelia”) when we hung out bunches, mainly because:
Anyway, I’m kind of sad that we didn’t hang out since freshman year, but at least we had this year (she told me we’re “legit” friends now; I told her before we were “sort-of-acquaintances”).  Amelia is wonderful, so when she told me she wanted to come over and do crafts with me, I was pretty excited.  Our original plan was to make these adorable animal-puppet washcloth things, but at the last minute I realized I have really let my embroidery skills slide and didn’t have time to learn the chain and satin stitches required for said project. So then we went with making a teddy bear. We made a bear for Amelia and a bird for me.  They look……well….unique.  The bear’s ears are on the side of his head, I’m not even sure how that happened. His weird arm is totally my fault; I was the one doing the sewing machine. My favorite part was when Amelia said “If I tie this ribbon tight around his neck, it gives his head a better shape.”  Poor little bear. I forgot to put a weight in the bottom of my bird so it doesn’t sit up without assistance.  So, while our crafts may have gone awry, it was a morning well spent with a great friend….who is about to pack up and move hundreds and hundreds of miles away.  Amelia and Michael, I’ll miss y’all!

Email ThisBlogThis!Share to TwitterShare to FacebookShare to Pinterest
Labels: put a bird on it, stuffed bird animal, Teddy Bears