My most dedicated readers (most likely my roommates/close friends/cousins/mother) will recall how I have lamented (regrettably, in video format, and on this very blog) how difficult it is to sew/craft things for gentlemen. Well, now I’ve at least got one more thing I can make for the fashion-forward gentleman, thanks to my friend Josh who a few weeks ago said “Can we make a bow tie this weekend?”  YES. YES WE CAN. Oh, I’m sorry was that caps lock? I just get so excited when people want to be crafty.

I used the pattern from this website and it worked pretty well.  After I made the blue bow tie per Josh’s request I was on a sewing kick, you know? Once I start I'd better just ride it out and see how much I get done (plus I was on break that week so I had some TIME! (not the magazine. and yes I am using parentheses inside parentheses. I do enough formal writing elsewhere)).   I had some pink gingham in my fabric stash and I thought that would make an awfully nice looking bow tie so I whipped that one up pretty fast….and then I made two more (navy with white polka dots) for my Dad and brother, but I don’t have any pictures of them in theirs yet because I haven’t been able to get them to try them on yet…. so I can’t sew the final two pieces together. My brother says he’s excited to wear it though, which coming from my brother means a lot because I don’t think I’ve ever heard him say anything like “excited” in a sentence about clothes. Growing up he usually just said "stop trying to tell me what to wear!" Bless you, Carter, for putting up with my many suggestions...and for following them that one time I got you those shirts from Old Navy in high school...and a million points to me for picking out that windbreaker you wear all the time. Just kidding....but I digress.

For the first bow tie I followed the instructions exactly, but for the second one I went off-book because the first bow tie was kind of stiff and when I clipped close to the seams it ended up with some funny thready spots that I had to fix (and then they bothered me A LOT (Sorry Josh)).  For the second tie (the pink one), I only used interfacing on one side of the tie, not both.  That way it was a little less stiff, and I think it turned out better. I also didn’t clip the excess at all; ¼ seam allowance is pretty small to begin with. 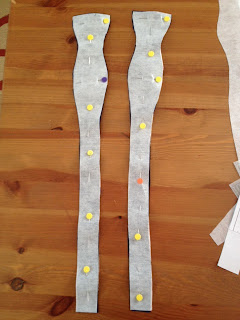 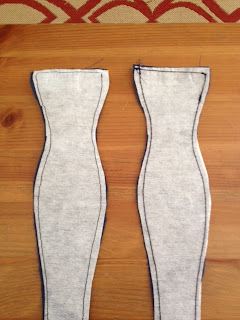 Honestly, the hardest part was turning them right-side-out.  I could have made them so much faster if it weren’t for that part. Be patient or you might poke through a seam or nick your fabric if you use tweezers or something to pull it out.  Make sure to poke the corners with a chopstick so they look nice and sharp.

So there. A not girly sewing project.

I was still sewing along happily when I remembered I’m about to be an Aunt (again!). Yep, my little nephew Joseph is supposed to arrive sometime in June.  Of course I had to make him something too, right?  Ta-da! Onesie with a tie appliqué ! I should make him a bow tie one too.